From Rice Farmers To Rice Millers (Part 3): What Rice Milling Equipment Is Needed 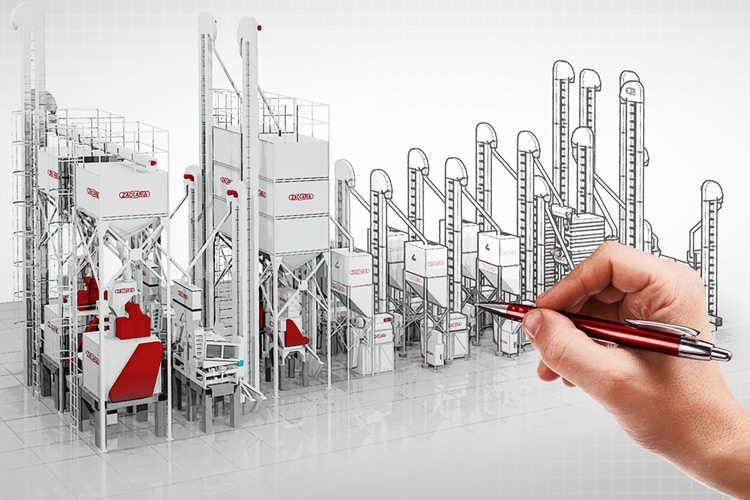 In our series about rice farmers becoming rice millers, we focus on the rice milling equipment needed to produce a high quality brown or white rice.  It’s important to note that some of this machinery is optional while it is impossible to mill rice without others.  This post will take you through a brief overview of each piece of rice milling equipment and explain its importance, benefits, and relevance in the process of milling rice.

The Cleaner:  When paddy rice comes out of the field, there is small waste such as dirt, sand, weed seeds, etc that have to be removed.  At the same time, there is also large waste such as grass, straw, frogs, and dirt clods.  (Yes, we really did say frogs).  That waste needs to be removed prior to going to the mill and a cleaner focuses on completing that task.  A simple cleaner has 2 separate screens with different hole perforations.  The top screen has larger holes where everything that is a rice kernel or smaller drops through.  The large waste rides on top of the screen and is discharged into a waste bucket.  The bottom screen has holes that are smaller than a rice kernel  which allows everything except a rice kernel to drop through.  The small material under the bottom screen is discharged into a collection bucket.  The paddy rice kernels ride below the top screen and above the bottom screen (kind of like the filling of an OREO) to continue on in the milling process.

The Mill:  After going through the cleaner to remove the impurities, the paddy rice goes to the mill.  Utilizing rubber rolls that spin in opposite directions at opposite speeds. the paddy rice flows between the rubber rolls where the husk is “popped” off of the rice kernel.  At this point you have brown rice.  The husk is conveyed pneumatically (by air) to a collection bin where it can later be sold as animal bedding or fuel.

The Paddy Separator.  The husking process will never be 100% accurate.  The next piece of rice milling equipment, the paddy separator,  will segregate the husked brown rice kernels from the unhusked paddy rice kernels.  The unhusked paddy kernels will return to the rubber rolls to be husked while the brown rice will continue down the line. It’s important to note that brown rice will not go through the next steps of whitening or water polishing, but can go through a brown rice brush polisher that brushes any dust or microbes off of each brown rice kernel.  Paddy Separators aren’t absolutely necessary in white rice milling, but are definitely required pieces of rice milling equipment if you want to produce brown rice.

The Whitener:  A whitener uses an abrasive stone and removes the bran layer from brown rice by friction in order to produce white rice.  The degree to which you remove the bran layer to get to the white rice is dependent on the desired whiteness of the final product.  To get a more starchy white rice, you would whiten more aggressively, while a less aggressive whitening process would produce a more light brown rice.  In this process, some broken kernels are created and are dealt with further in the milling process.  The bran which is removed during this process is conveyed pneumatically and collected for further sales and distribution.

The Indented Cylinder:  The indented cylinder’s sole purpose is to separate rice kernels of different lengths.  Whole kernels, which are defined as kernels that are whole kernels to 3/4 kernel length, are more valuable as a food grade product than broken kernels.  Broken kernels can also be sold to pet food distributors, made into flour, or even blended back into whole kernels as a percentage of the final packaged rice.  The whole kernels continue through the mills while the broken kernels are usually collected in a “brokens bin.”

The Color Sorter:  Not every rice kernel is perfect.  Some kernels have stain on them, spots known as peck, or are even immature and green.  The majority of rice that is purchased in supermarkets has been ran through a color sorter which has removed all of these imperfect kernels.  Color sorting isn’t an absolute necessary piece of rice milling equipment, but is considered the last opportunity to remove any impurities in your final product prior to packaging.

You can find a brochure on all of the rice milling equipment that ZaccariaUSA offers by clicking here to go to our product page.  If you missed the first two parts of this series, you can go directly to those blog posts by clicking the links below:

From Rice Farmer To Rice Miller (Part 1): The Benefits

From Rice Farmers To Rice Millers (Part 2): Who To Sell To

Thanks so much for taking the time to look through our blog.  Make sure and keep up with us by signing up for our newsletter and following us on Facebook.  If there is a certain topic that you would like to see discussed on the blog, please email me at chad.joyce@ZaccariaUSA.com and I will make sure to address your questions openly to share with our small community.